The contrasting approaches are hard to ignore. One professional sports league has decided to go above and beyond to provide financial stability for its on-the-cusp players, while another has resorted to back-door political tactics to circumvent minimum-wage laws for its minor leaguers.

In one case, the NBA announced that it’s significantly raising salaries for G-League players. Starting with the 2018-19 season, every player in the NBA’s official development league, formerly known as the D-League, will earn a minimum of $7,000 per month — up from a minimum of $3,600 — for the five-month schedule, a salary that’s in addition to housing and insurance benefits paid for by the league.

Meanwhile, MLB’s lobbying efforts — to the tune of $1.3 million each of the past two years — paid off with a provision that was included in the $1.3 trillion spending bill passed by Congress on March 23. The provision, absurdly called the “Save America’s Pastime Act,” serves one purpose: to make sure minor league baseball players are exempt from overtime/minimum wage standards as set by the Fair Labor Standards Act of 1938. It appears on page 1,967 of the 2,232-page bill, and it wasn’t part of any of the original drafts of the bill.

How is this provision related to a government spending bill, you might ask?

“You know, I guess we shouldn’t be shocked that this is the way our government works, and we shouldn’t be shocked that billionaires seek special treatment from our government,” minor league pitcher-turned-lawyer Garrett Broshuis told Sporting News. “But it’s still rather appalling. Instead of doing the right thing and complying with basic minimum-wage laws and giving these guys a long-overdue raise, they spent a couple million dollars and bought themselves an exemption.”

Broshuis was a fifth-round pick by the Giants in 2004, and he pitched six seasons in the minors before retiring short of the majors to pursue his law degree at Saint Louis University, where he graduated valedictorian. He’s an attorney at Korein Tillery, and he’s representing a group that filed a lawsuit with a goal of forcing baseball to adhere to minimum-wage and overtime laws. That case is in the Ninth Circuit Court of Appeals; briefs have been filed regarding how the spending bill impacts the lawsuit, and there is a hearing scheduled for June 13 that will determine whether it can continue as a class-action suit.

“It certainly doesn’t end our efforts and it doesn’t end our case,” Broshuis said. “It doesn’t preempt state laws. States are allowed to go above and beyond federal laws, minimum-wage requirements. We’ll keep working on this and hopefully at the end of the day we can help improve things for a lot of guys, because it’s desperately needed.”

Let’s look at the contrast between MLB and two of the other professional sports leagues with minor leagues, the NBA and the NHL.

Unlike MLB’s multi-tiered minor league system, the NBA has only one level, the G-League. These are the players closest to the NBA, and they often shuttle up and down from their NBA affiliates. The G-League is, essentially, the equivalent of baseball’s Triple-A level. There are several levels of minor league hockey; the NHL’s Triple-A and G-League equivalent is the American Hockey League (AHL).

Let’s look at the minimum salaries for those top minor leaguers, as a comparison. We’ll start with baseball. Veteran Triple-A players, guys who are on the parent club’s 40-man roster or guys who were signed to minor league free-agent contracts, are examples of players who earn more (often significantly more) than the minimum. But the minimum for a player in his first year in Triple-A? That’s $2,150 a month, for a season that lasts five-and-a-half months. Players get a $25 per diem when they’re on the road, and they’re on their own for in-season housing.

The new minimum salary for G-League players is $7,000 per month plus housing, which is provided by the NBA during the season. Similar to the baseball setup, players who have NBA experience, or are on two-way contracts or are G-League veterans, can earn significantly more money (up to $385,000 for the season). G-League players also have a $50 per diem on the road.

“I’m really happy for those (G-League) players. They’re providing a service and they deserve a fair compensation,” Broshuis said. “They aren’t getting rich, but that’s a good entry-level salary for them. I’m happy the NBA has taken those steps. It’s another example of what MLB needs to do. There’s no reason that MLB can’t do it.”

Players in the AHL are part of the Professional Hockey Players’ Association, a union founded in 1968. The minimum salary for any player signed to an AHL contract for the 2018-19 season will be $47,500 (more than $7,900 per month for six months), with a $75 per diem on the road. As with Triple-A and the G-League, veteran AHL players, guys with NHL experience and other mitigating factors, can earn far more than the minimum (the league CBA specifically says there is no maximum). No housing is provided in the AHL, but in the ECHL (one step down, with lower salaries), the PHPA-negotiated CBA mandates that furnished apartments are provided by the league. 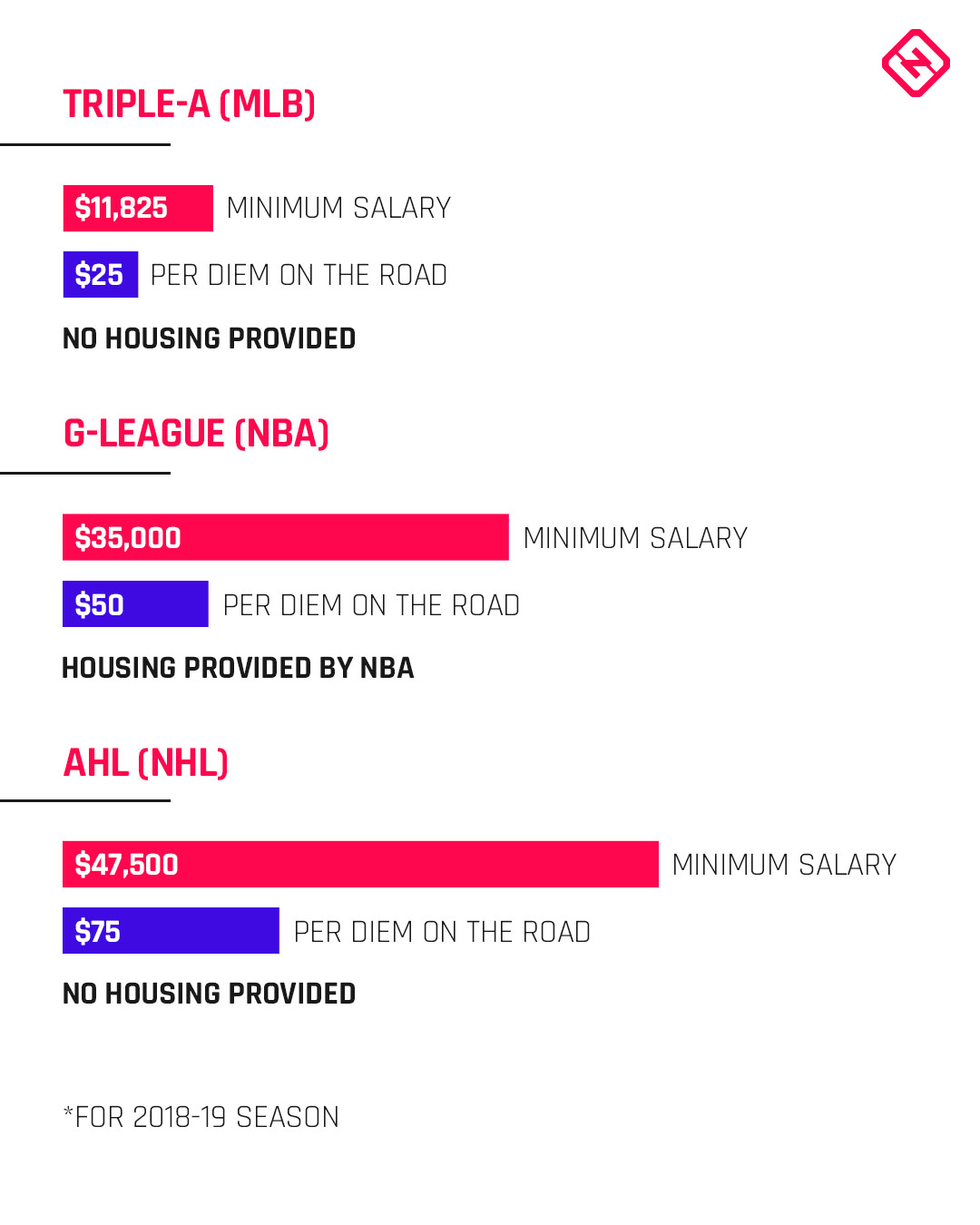 Think about those numbers for a moment.

The players that Broshuis and his colleagues are representing aren’t trying to break the bank. They aren’t trying to bleed owners dry. They’re trying to survive while chasing a dream. Salaries for minor league baseball players hadn’t been adjusted since 2006. Think about that, and now think about how money has impacted virtually every other aspect of baseball; MLB gross revenues exceeded $10 billion in 2017.

And then there’s this: Each owner will receive an extra $50 million this year for baseball’s sale of BAMTech, the digital media company spun off from MLB Advanced Media.

We talked about Triple-A salaries. Now, let’s look at lower levels. For Double-A, it’s a minimum of $1,700 per month, with a $100 per year bump every year they’re back at Double-A. For Single-A players (including rookie and short-season leagues), the minimum for first-year players has been $1,100 per month; they get an extra $50 per year for every year they’re back at the same level. Dominican Summer League players get $900, total, for the three-month season (but as a league out of the U.S., that’s another conversation).

Oh, and baseball players aren’t paid during mandatory spring training either. That’s not a concern for big leaguers, with their massive, guaranteed contracts and $100 per diem, but for minor leaguers? Big damn deal.

“All minor leaguers are required to go to spring training, and MLB has a policy across the board that requires them to work all during spring training, and they aren’t paid for that work at all,” Broshuis said. “That’s the type of thing that we’re seeking to change. No other industry in America would even think about doing that to their workers, requiring them to work for a month for free. So hopefully we can change those types of things.”

Players who know they’ll have to survive on less than $12,000 for the next six months have to somehow survive six weeks on no salary and just a $25 per diem, and a daily chunk of that goes to the clubbie for breakfast, lunch and other clubhouse duties.

“It’s crazy. That was always one of the hardest times while I was playing and it’s still one of the hardest times for players today,” Broshuis said. “You do a full month or so of work for no pay, then at the end of it you’re scrambling to find an apartment wherever you’re assigned at, and you not only have to pay the first month’s rent on that apartment, but you also have to pay the security deposit, too. So coming up with that money while at the same time paying your cell phone bill and your car bill and even possibly a rent payment back home if your lease was still going from the offseason, that’s an incredibly tough time for guys.”

There have been excellent pieces on the struggles minor league players face, including this from the St. Louis Post-Dispatch and this from The Athletic.

Baseball’s powers-that-be are doing their best to distract from the bottom line. Rob Manfred, in this interview with The Athletic, and MiLB President Pat O’Connor, in this interview with Baseball America, both argue about the logistics of what determines “actual” team-related work, and what work the player is doing on his own. They say, somehow with a straight face, that calculating a player’s actual hours worked in an effort to determine how far over 40 hours per week they go would be too complicated.

But here’s the thing: If baseball would decide to pay every minor leaguer even half of what AHL players get, the lawsuit would disappear. Yes, minor leaguers would still want to get paid on a scale relative to their peers in other sports — that’s not an unreasonable request — but the words “minimum wage” wouldn’t be part of this conversation. “Overtime” wouldn’t matter.

The lawsuit only exists because minor leaguers are trying to use basic labor standards to force MLB to pay them the minimum amount of money as required by law. That is not greed.

Know why MLB had to sneak the Save America’s Pastime Act into an unrelated government spending bill? Two years ago, the same bill was introduced by two senators. The reaction from the public was so swift and so severe that less than a day later, one of those two senators, U.S. Rep Cheri Bustos, D.-Ill., abruptly changed course. She withdrew her support for the bill: “In the last 24 hours, several concerns about the bill have been brought to my attention that have led me to immediately withdraw my support of the legislation.”

So, instead, baseball lobbied Congress to sneak in this provision. The cost to make things right is incredibly small, relatively speaking. To bump the minimum salary for every minor leaguer up to $30,000, it would only cost every team $4.5 million a year. For a league that took in more than $10 billion in gross revenue in 2017, that’s a pittance. It makes you wonder why they wouldn’t do that just to make all this bad publicity go away, doesn’t it?

Let’s bring up another point that owners — and many fans — talk about, too. Players who are high draft picks get big signing bonuses. After the 2017 draft, 72 players signed for a bonus of at least $1 million. That’s life-changing money, no doubt. Instead of the free-for-all the draft-bonus realm used to be, each pick now has an assigned value, a system that started in 2012. Teams cannot exceed their total draft allotment without incurring serious penalties, which means they try and manipulate how and where they draft players so they can offer more money to the most desirable players. And that hurts all but the handful of best players.

And this point is worth emphasizing again: The provision stealthily introduced into the spending bill isn’t about bonuses given to high draft picks. It’s not about the higher-paid, veteran minor league free agents. The system works, at least to an extent, for them. When players sign a minor league contract after the draft, they’re locked into that team for at least seven years, at the regular payment scale, before they can become free agents. Those 23 10th-rounders who signed for a bonus of $10,000 or less last year? They have to make that bonus (which is realistically about $6,000 after taxes) last as long as possible.

The spending-bill provision made possible by the $2.6 million MLB spent lobbying Congress the past two years was aimed at one thing: keeping the salaries of baseball’s lowest-paid players teetering on the edge of the poverty line.

That’s just not right. And when compared to how the NBA and NHL treat their minor leaguers, to borrow a word from Broshuis, it’s appalling.